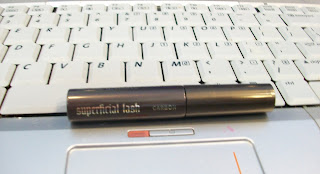 Last weeks mascara was horrible. It was Hourglass Superficial Lash--absolutely the worst mascara I have ever worn in my life. I stopped wearing it after the 4Th day. I was going to push on and wear it the full 7 days, as this mission calls for...but I just couldn't put myself through it. I don't want to rant on like a mad woman, but I really don't have anything good to say about this mascara. It doesn't add volume, it doesn't lengthen and it doesn't darken. One thing it can do is clump! The most alarming thing about this stuff that I discovered was that it doesn't dry!!! Even after hours of wear! It just sits like goo on your lashes! Not cute. Slightly disturbing, actually. I will never wear or recommend this mascara. As soon as I finished the picture, I tossed it out! 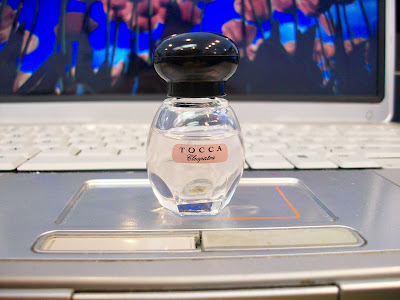 The perfume of last week was Tocca's Cleopatra. It was ok. Not something I would have chosen for myself, but it was nice. I got alot of compliments on it, so I guess others found it more appealing on me then I did on myself! For me, it was just ok. It's a floral scent with a hint of an oily note (almond oil) that I associated with candles probably because this brand is known for their candles. Its a crisp scent, that I would probably wear as an evening perfume. But at $68.00 USD for a little more than an ounce...I have to love a perfume to spend that much, and as I said--this was just ok for me.